As I see both options can handle 7GPUs. So what are the benefits of paying extra $619 at this or future time?

cakeller98 Sat Mar 23, 2019 7:53 pm
I get that the licensing model is in-flux, at least in regards to acquiring, essentially, an owned license.

Otoy has been a very non-douchy company when it comes to licensing. And with many of the big companies strong-arming customers in to essentially paying around 2x as much as previously for "lifetime usages" - whenever a company goes subscription only, it wigs me out because it's just so obviously NOT about the customer - and worse, they (not Otoy) lie with their marketing. The biggest lie is the idea that subscriptions will make them more productive. UM NO they will do exactly the opposite. if you're renting the right to use the software then that's it... you don't get the software to keep ever, so they don't have to do ANYTHING regardless if they do, that's just on their whim - there is no contractual obligation to develop new features, or add functionality, or even fix bugs.

That said... the negative emotions around Otoy's move toward subscription is, I believe/hope, largely due to the fact that the details of rights/privileges are NOT 100% works out. It says in the FAQ that they are at least open to the idea of ownership after 3 years of paid subscription. rent-to-own.

If that reverts to V4, that's not really a rent-to-own for "owners" like me. I already own my v4 license. so I could technically stop at any time and still own it. I purchased my 2 years subscription, and hope that when they figure it out and my 3 years paid comes up (and as I continue) that if I ever discontinue my subscription (e.g. retire) that I can continue to use that license as it was when my subscription ran out (as stated without support or online features - no problem)

I HOPE this is the way it is going forward. And really... for new licenses, I get the 3 years rent-to-own thing. But for those that have been paying for upgrades for years already... would be nice to be treated with a little bit more loyalty points than brand-new customers.

You gave me a free upgrade to V4... so what, I didn't ask for that. I asked to NOT move to subscription at all

What subscription companies don't seem to get is: 1) doubling the total-lifetime-cost of usage is brutal. 2) I'm more than happy to continue paying for software that I own. just knowing that it's mine if I stop makes me feel good about continuing to invest in software that, sometimes I go months without using.

I guess that's my biggest gripe - sometimes I use software for a few days at a time, and then go weeks without using it. rental for a tool you use day-in and day-out is much easier to justify in the budget. but stuff you use occasionally... well... it's not great.

Fingers crossed that Jules/Otoy continue to appreciate the folks that have supported them from the early days. (well and every one of their customers)

Octane is hands down my favorite renderer. It is not the only capable fast renderer out there - but it is my favorite. With all the added stuff in 2018.1 / 2019 OMG keep it up it's amazing!!!

PLEASE JUST MAKE A CLEAR SIMPLE COMPARISON CHART WITH ALL OPTIONS / CONSEQUENCES... in plain English, because the wording is confusing... and confusing leaves us thinking the worst.

I think the following are the main differences ??? but I'm not 100% sure

gaazsi wrote:most awkward point is the limitation/removal of networkrendering. that was one of my main reasons to use octane... from my pov its obvious that customers should be pushed to use the octane renderfarms that way...
absolutely wrong way...

Network rendering is in the enterprise builds.

i am aware of that... but for what reason you take it away from studio licenses? and why it is limited to a number of cores?

TRRazor Sun Mar 24, 2019 8:48 am
I already posted this in a slightly different form in the corresponding plug-in forum and was advised to post it here, to pitch it to the right people, since face_off is developing the plug-in has apparently little to no say in these things.
I've been using the DAZ Studio plug-in for a couple of years now, before that I was using the Poser plug-in. (Just making that clear, to show from what point I'm coming from. I know that these are not full 3D suites like C4D, 3DSMax and so on, but I've been working with them for several years now, really enjoying OctaneRender).
I enjoyed working with OctaneRender so much, that about three years ago a friend and I started to develop a skin shader (some of you might know it, it's called RedSpec SSS) for it with success.

In comparison to many of the other plug-ins the OctaneRender for DAZ Studio plug-in is in a pretty underdeveloped state. A lot of the features (when new ones come with the fresh standalone releases) cannot, or won't be implemented into it, because face_off feels, that they wouldn't make sense, or are too hard to implement in to the plug-in.
While I do understand that this makes sense for SOME features, it's unacceptable for others. At this point, OTOY is asking us to shell out 19,99$ a month for a plug-in we cannot longer fully own (since we would only be renting it) and that comes with limited functionality in comparison to the other fully integrated plug-ins.

face_off has mentioned several times that the DAZ Studio plug-in would need a complete rewrite in clean code, since what was handed to him, when t_3 left development of the project would be too tedious to fix.
Before this hasn't happened, I don't see why I should pay a monthly fee for something that isn't on par with the other plug-ins. Of course, this also limits our possibilities for offering support for the newer versions of OR with our skin shaders bringing us to a point, were we started contemplating about stopping development entirely (since we can't check, if our shaders do work correctly for the newer versions.)
We also started development porting our shaders to Universal materials, which we stopped as well, since future development with 2018.1 is unsure at this point, since we won't switch under the current conditions as mentioned above.

What I'm suggesting is, that OTOY should start looking into the following things:
1.) Either fully rewrite or hire an additional programmer for the OctaneRender for DAZ Studio plug-in, so that the plug-in can be brought to a clean-slate-state, on which face_off could then work with the same ease, as with his other (fantastic) plug-ins
2.) For as long as this hasn't happened overthink the pricing of the OCDS plug-in
3.) Rethink publishing strategy / business model for plug-ins that cannot (and will never) carry full functionality, because of restrictions imposed by their host applications

Thank you, for your time reading this and considering some of the proposed points.
If somebody from OTOY could respond to this post, I would really appreciate it.
W10 64 bit | i7 3770K | MSI Geforce RTX 2080 (8GB) + GTX Titan Black (6GB) | 32 GB DDR3 RAM
REALISTIC HUMAN SKIN SHADING - REDEFINED
RedSpec TGX Hair for Poser / DAZ Studio OctaneRender - OUT NOW visit http://redspec-sss.com/

byMELT wrote:Well, owner of 3x V4 licenses here. Not happy that I subscribed to studio (20$ / month) to find out I can only use 2 GPU's

I think there will be no free version of Octane for Maya or Houdini, because none of these software are free. The next version coming is Octane for Blender. 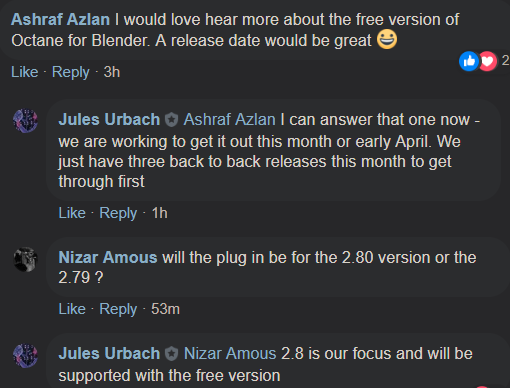 I found this conversation on Blender Artist. Maybe someone confirms that what is going on right now.

ForceX Wed Mar 27, 2019 5:57 pm
I agree with Trrazor. As a hobbyist Daz Plugin user the lack of a complete feature set is unacceptable if I am expected to pay monthly or yearly. Saying something is to difficult or will require a complete rewrite is not an acceptable answer for a product that people are paying for. And now we are expected to continually pay for features that are unavailable. If you are going to have a subscription model then have a price that matches the capability of the plugin, or fix the plugin, or don’t support the program at all. There are still official notifications on this site that state that RTX will be implemented in v4, but now that is no longer the case and RTX will only be available in 2019. I was fine with the slow dev cycle with perpetual licensing. I will not be upgrading to any future versions octane and will be exploring alternate options or simply go back to Iray. I don’t support company’s that only offer subscription services.